of a small band of men headed by Bro. Robert the club might indeed have

folded. We owe so much to those men who laboured so hard in the early

days with precious little in the way of reward.

St. Marys contested their first senior chip final in 1937 but were beaten by

Wolfe tones. The following year they were back in the final again but were

beaten on a replay by then Louth kingpins Y Ireland’s. We reached the final

boardroom to an objection by opponents Gaels

amalgamation was formed with St. Dominick’s a club who at that time were

based in the north end of Ardee. The agreement for the amalgamation

basically was that the name St. Mary’s would be retained but the team would

play in the blue and white of the Dominick’s. The Mary’s original colours were

red and white hence the colour of our change strip to this day. This

amalgamation marked the beginning of the great years and this new St.

association in Louth. For the following year 1946 St. Marys won the first of

ten senior cships beating y.Ireland’s by three points. This heralded in the

Sam Maguire in that never to be forgotten year of 1957.st.Marys contributing

six players to the squad.

Dawson’s demesne. Money was very scarce but due to facilities afforded

them by the ulster bank a site on the Dundalk road was purchased from Mr.

jas roe for £750. However soon afterwards a ten acre site on the Drogheda Road

was put on the market by Mrs. Elizabeth Casey, Mr. roe graciously

released the club from the former sale and Mrs. Caseys land was purchased

This of course is the site of our beautiful Pairc Mhuire today. Back in this time

was a huge financial commitment by the club, many so called experts at the

masse should be committed to the newly opened St. Brigids mental hospital on

the Kells Rd. You might ask indeed how the Mary’s paid off the debt. Well they

successful carnivals, marquee dances and seven side tournaments the debt

was reduced to manageable proportions and eventually paid off

Around this time a famous but true story is told of a Sunday back in 1948.The

then county Board sec. Paddy Duffy arrived in Ardee to tell the Mary’s that

in a tournament final. Mr. Duffy left a set of Louth jerseys and departed with

in a great match. Highlight of the story was, that after hearing that the Louth

team that had just beaten them were made up entirely from Ardee St. Mary’s

a man and give a standing ovation to the team that had just beaten them.

Sportsmanship of the highest order, chivalry was alive and well in those days.

After our senior cships success in 1960 we had a few lean years, but backed

final again in 1968 and beat St. fechins by a point in Drogheda. We reached

Kickhams respectively. The following year 1972 the Mary’s came back very

defeat of the previous year. We made it back to the final in 1975 a year that

saw the tragic death of player paddy rice, this I think made us more

Cooley by six points in an eighth goal thriller. Our golden jubilee year 1978

saw us reach the final of all three senior competitions, however losing the

championship final to Cooley by a point only winning the ACC cup, final of

which wasn’t played until early 1979.

when we were relegated to intermediate ranks. We had some consolation

that year winning the ACC cup. However we returned to senior in 1987 and

reached the cships final in 1989.but there was no repeat of 75 as Cooley beat

us in Drogheda. We were back in the final again in 93 but suffered defeat to a

strong clan’s team. Highlight of the early 90s was a resounding victory over

then senior Champions Stabannon in cardinal o Donnell final 1991.however

1995 when beating St. Patrick’s in Dromiskin to land our first Joe ward in 20

years. We were back again in the final in 1997 only losing out to Stabannon in

the o Donnell cup the previous year, we were quietly confident of beating

our opponents st. Pats, and as the game entered its final stage we seemed to

gasp equaliser and we were beaten in replay the following sat. night. our

a final which seemed to be ours for the taking. We had some consolation that

year by winning the ACC cup, our first senior trophy in 14 years.

our committees over the years for their work in enhancing facilities there,

improvements which indeed are ongoing. It is with great pleasure when

people who use our facilities, from our academy youngsters right up to our

facilities on a recreational and social basis, it brings home to you the huge

part St. Mary’s plays in the life of our community.

When charting the history of St. Mary’s our story would not be complete

without a mention of our old clubrooms in bridge St. now but a fond and

distant memory. One cannot underestimate how important a function these

supporters in years gone by particularly in forties, fifties and sixties. This was

the meeting place; see you tonight in the club for a game of snooker, rings

table tennis or just to watch television, In fact apart from wright’s electrical

reward who actually willed the property to his beloved St. Mary’s. 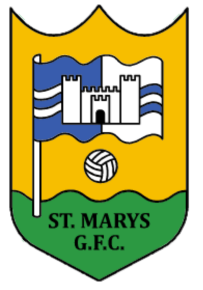